On Sunday, 18 February at the 2018 Declaration of Vintage, the Barons of Barossa named our winemaker Richard Langford 2018 Barossa Winemaker of the Year.

The Declaration of Vintage is held on the third Sunday of February each year. For this occasion, the Barons of Barossa come together in Tanunda and celebrate the day with a blessing of grapes at the historic Tabor Church followed by a main street parade. A ceremony is held at Keil Garden and includes the announcement of Winemaker and Vigneron of the Year. Winemaker of the Year has been awarded since 1998 and Richard joins a great list of recipients. 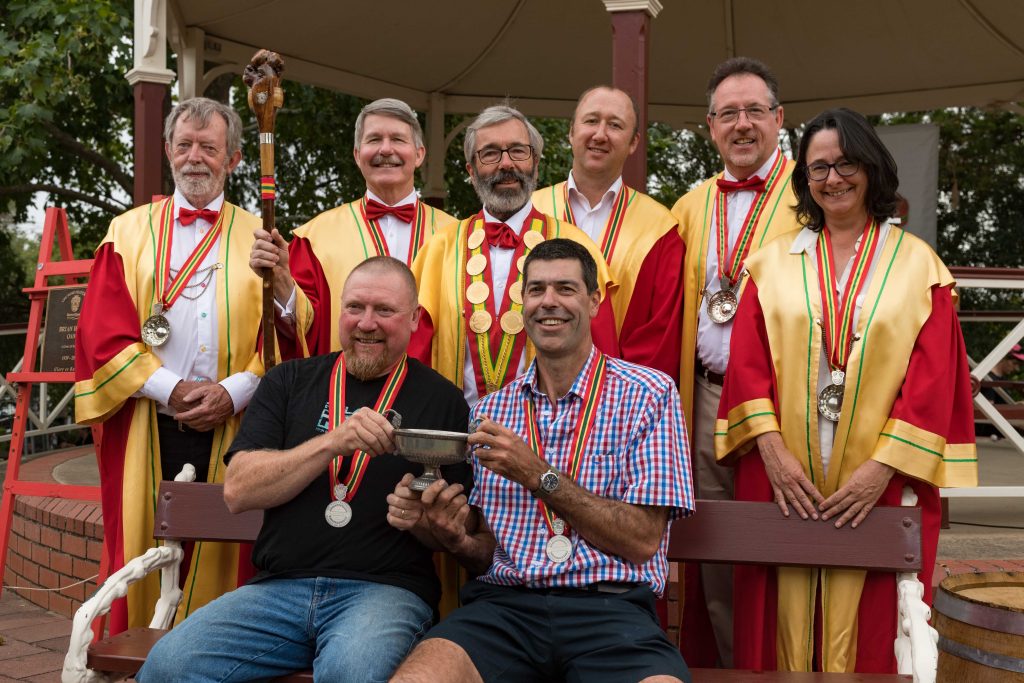 Front L-R Dan Falkenberg, Vigneron of the Year and Richard Langford, Winemaker of the Year with Barons of Barossa at 2018 Declaration of Vintage. Image by Stuart Blackwell.

“It is very humbling to be included with such an esteemed list of past recipients, and this is truly a great honour of which I am quietly proud,” said Richard.

Richard took the winemaking helm at Elderton in 2003, managing not only Elderton’s own crush but also overseeing winemaking for a further 600-1000 tonnes of contract work for some of the region’s premium labels.

Richard has worked tirelessly with viticulturist, Peter Wild, to ensure the highest quality fruit comes from the vineyards that Elderton own and manage. At vintage time, Richard is relentless, working around the clock to guarantee the best outcomes possible.

In his 14 years with the company, Richard has elevated Elderton’s wines to a new level, winning multiple trophies and countless sky-high scores from all the luminaries of the wine world including Halliday, Parker and Wine Spectator, while protecting the history and traditions of the business set up in 1982.

He has been an integral part of the Barossa Wine Show committee for the past three years and has generously donated his time to be the Chief Steward of the show for the last two years. A supporter of the Riesling Spring Tasting, he is also involved in a number of other Barossa committees.

Richard is a devoted family man and an avid hunter and fisherman with an enduring passion for wine and food.

“We are excited and very proud that Richard has been named 2018 Winemaker of the Year,” said Cameron Ashmead, Co-Managing Director of Elderton Wines.

Allister Ashmead, Co-Managing Director notes, “We adore Richard for his understanding and attention to detail, work ethic and desire for better practise in all of our operations. It is great to see him get some external recognition for his efforts, as a real asset to Elderton and the Barossa Valley community as a whole.”

Elderton Wines also congratulates Dan Falkenberg on his naming as Vigneron of the Year.

You can see more photos of the 2018 Declaration of Vintage at https://www.barossaherald.com.au/ story/5234950/another-great-barossa-vintage-gallery-videos/