Here is another installment of my monthly light hearted look at the happenings at Elderton.

I reckon that I am probably preaching to the converted, but March in Adelaide has a very apt name –Mad March.  That is because it is simply crazy or as the youngies say ‘cray-cray’!  Who knows why, but as a state we somehow try to squeeze everything that should have probably been spread out over into the rest of the year into about 30 days.  Think Fringes, Festivals, Car Races, Concerts and most importantly vintage into only one of 12 months. But you can rest assured, we here at Elderton try and do everything. Admittedly I think it has more to do with my massive FOMO*.

Fringe & Festivals – Tick.  Here’s little Louis and I, living it up at the Royal Croquet Club cheersing with some nice white bubbles.  You are probably saying he is far too young to drink bubbles and sadly you are probably right – although in 5 years he should be good to go…. 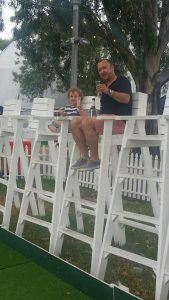 Concerts – Tick.  We were lucky enough to go and see Adele at the Adelaide Oval.  We had incredible passes that were right at the stage – we could have touched her if we wanted.   I didn’t of course, but our winemaker Richard Langford said that he wanted to. Unfortunately, that night we were not powered by Elderton, rather some thin & sweet and obviously ‘delicious’ Aussie sparkling that was served out of plastic bottles.  I figure these plastic bottles was so Richard could not hit Adele that hard if he did in fact try.  Here is Lou Langford and Julesy bopping it up that night.  It’s a girl thing, Richard and I just didn’t get it. 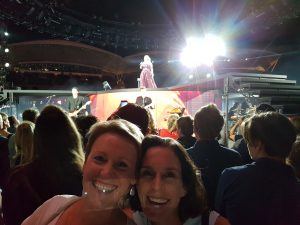 Car Races – Tick.  We took this to the next level and was so the total opposite of Adele.  As you can see from the next photo, the boys were actually part of Craig Lowndes’ pit crew at the Clipsal 500 and we are changing the front left.  If you are American and reading this, the Clipsal 500 is like NASCAR but much classier as you would expect as we attended. 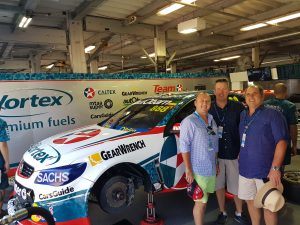 If you believe any of the last paragraph you are cray-cray!

Vintage – Not Ticked.  More on this next blog instalment.  The vintage crew have the winery the shiniest and cleanest it has ever been patiently waiting for the first intake of 2017 reds.  You can see how motivated the staff look, by judging the facial expressions our resident Canadian cellarhand Rachel below. 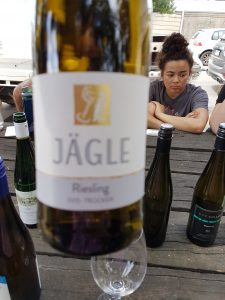 *FOMO – As defined by the internet, Fear Of Missing Out – anxiety that an exciting or interesting event may currently be happening elsewhere, often aroused by posts seen on social media or in try hard witty blogs.