We love it when the Tour Down Under comes to town! Such a festive atmosphere comes over the state, as towns dress up with bike-themed decorations and people flock to each stage to cheer on the riders.

2019 is the 21st birthday of the Tour Down Under! First staged in 1999, the race winner that year was proudly a South Aussie – Stuart O’Grady. In 2008 the Santos Tour Down Under joined the UCI WorldTour, becoming the first event outside of Europe to do so. Last year also saw the Women’s Tour Down Under upgraded in status with international teams now beginning their season here too. Since those early days, the race has grown to now be the biggest cycling race in the southern hemisphere.

The race is held in January each year, making it the first event on the international cycling calendar – a great place for riders to gear up for the year ahead. This is also a perfect time to see South Australia in all its summer glory; from beautiful beaches to vibrant green vineyards and all the towns in between. Adelaide also features as a fabulous home base for riders and spectators alike.

In 2018, 810,000 spectators lined the roads of South Australia to watch the stages of the race, with more than 46,000 visitors from interstate and overseas!

My 4 year old loves the thrill of cheering for the riders and the chase that ensues when drink bottles and feed bags are thrown from the bikes. A piece of history all of her own – a little souvenir about which she will tell stories to whoever will listen.

I just love the zooming speed of the peloton as they negotiate the road, obstacles and each other. It is quite thrilling to be so close! We’ve been lucky to have the race come past Elderton a few times in the last 7 or 8 years. In 2014 the race came right along the front of Cellar Door so we hosted spectators on the lawn for a fun afternoon. 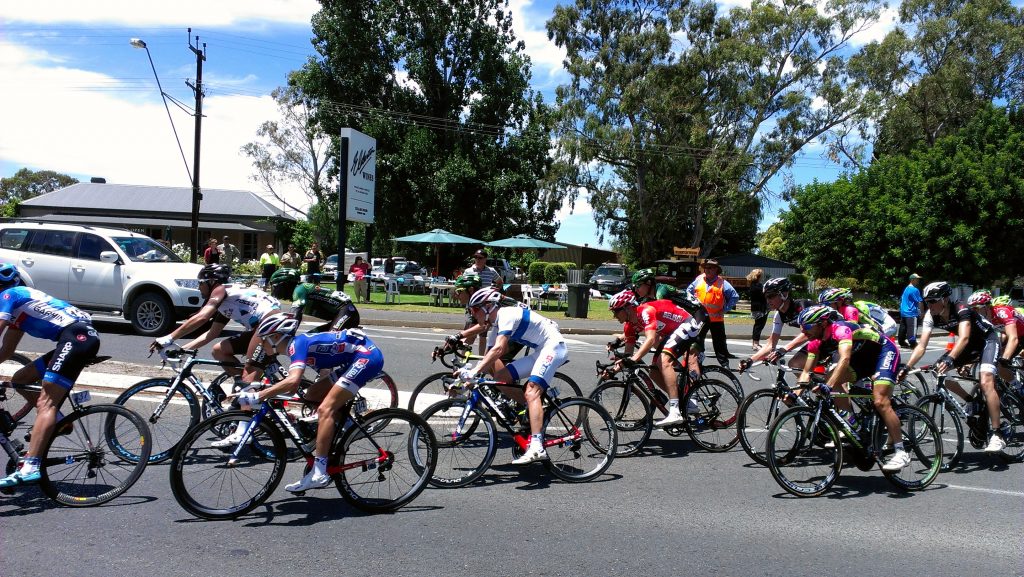 Team Tinkoff Saxo had stopped by pre-TDU whilst out training that year (2014) when they saw our centipede bike out the front – it was so cool to see a pro team hop on our bike for a photo! 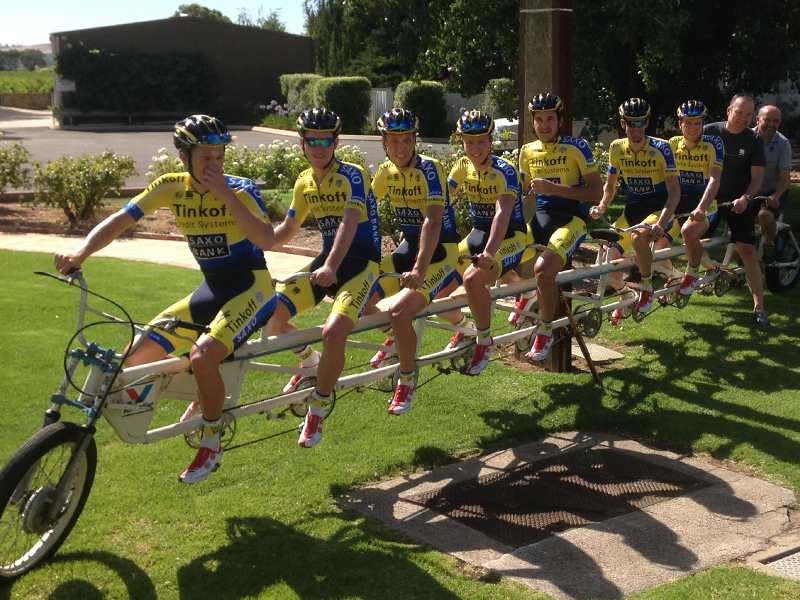 This year, whilst the race doesn’t come past Elderton, it is coming the Barossa again. Next Wednesday, 16 January, Novatech Stage 2 finishes in Angaston after winding its way through Williamstown, Eden Valley, Tanunda, Greenock and Nuriootpa following a start in Norwood. The 149km stage is expected to finish at 3pm in the Angaston main street. Angaston is putting on a town celebration from 12pm – 4pm, with a food and wine trail and family friendly activities. Check out more at http://angaston.org.au/tour-down-under-2019/.

Check out this video, with Maggie Beer, running through the stage:

The Santos Women’s Tour Down Under is also racing around the Barossa, this Friday, 11 January. Starting in Nuriootpa, the riders will race over 116km with a finish on the grueling Menglers Hill. [eeek – a deceivingly steep ride if you’ve only driven up it before!]

So if you’re heading to the Barossa for the Tour Down Under, add us to your itinerary and pop in to see Jodhi, Chris and Kelly at Cellar Door and enjoy a tasting or maybe a cheese plate and glass of wine.

We wish all the riders and teams the very best for the 2019 TDU. Here’s to a thrilling race!