The 2016 Neil Ashmead Grand Tourer Shiraz is a new vintage release Barossa Shiraz, now available for purchase from our online shop, and open for wine tasting in our Barossa Valley Cellar Door. 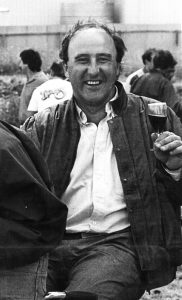 First released from the 2008 vintage, the Grand Tourer Shiraz is named after and produced in honour of Elderton co-founder, Neil Ashmead. Neil, who along with wife Lorraine, established Elderton and was a vital link in creating the Barossa’s currently enjoyed status as one of Australia’s most important viticultural areas. Infectious enthusiasm was one of Neil’s drivers in helping to pioneer the revitalisation of the region from the doom and gloom era of the late 1970s and early 80s. He pushed for Elderton and Barossa Valley wineries to be among the best in the world.

Neil was a ‘Barossa Road Warrior’ like no other. Driving tirelessly from city to city with a car loaded with wine, doing tastings and dinners with whoever would listen, and generally spruiking the Barossa in a time where people were not really interested in a region that was stereotyped as a fortified producer. It was his love of fast cars that made this pursuit a little easier, thus the unusual choice for the name of this Shiraz. Unfortunately Neil passed away prematurely in 1997, however is succeeded by his two sons, Cameron and Allister, who believe this wine to be a very fitting tribute to an amazing individual who was always willing to push the boundaries of expectations and limitations.

Find out more about this wine and buy online today.