As we approach Mother’s Day, we always like to say thanks to our mum, Lorraine, for everything she achieved whilst at the helm of the family company – for her passion, dedication, hard work and prudent decisions, as well as everything she has done for us as our mother and grandmother.

Our thanks to mum became something to share in 2002 when the CSM was renamed Ode to Lorraine. This wine is truly the hidden gem in the Elderton portfolio of premium reds – a blend of the finest barrels of each of the Elderton Nuriootpa vineyard varietals, Cabernet Sauvignon, Shiraz and Merlot. Here’s a bit more of the story behind the making of Ode to Lorraine… 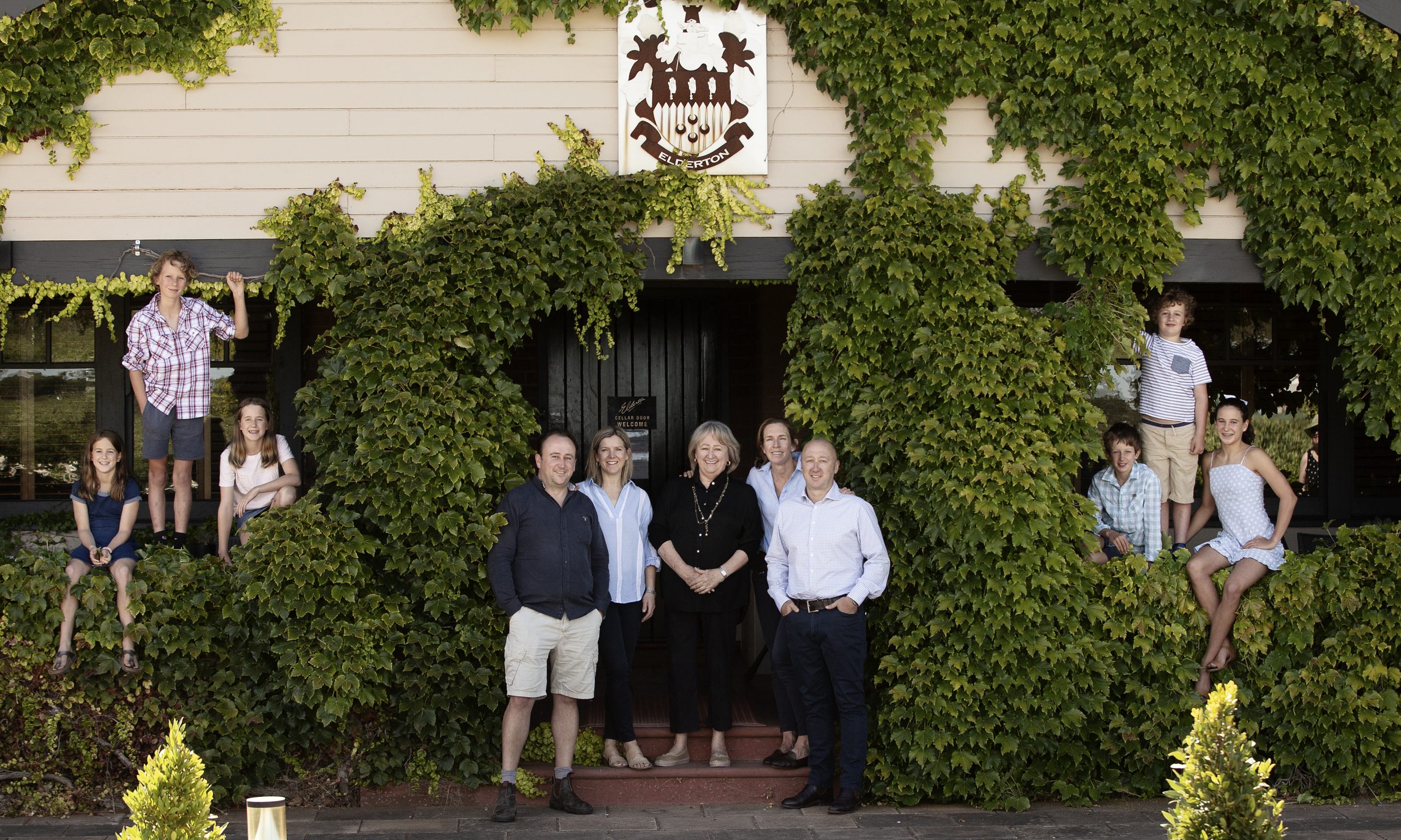 Lorraine Ashmead is an amazing person, who is admired greatly among many in the Barossa for the tireless yet quiet manner that she has been able to promote Elderton as well as the entire appellation. Her tendency to shy away from the spotlight though was one of the major reasons why her two sons decided to dedicate this wine to her from the 2002 vintage.

“We really wanted the entire world to know not only how much Mum has dedicated herself to our upbringing but also the efforts she has put into Elderton behind the scenes. Historically she always allowed our Dad, Neil, to take the spotlight and most of the credit, and whilst today she certainly has taken a back seat to Cameron and myself in the family company, she is still an invaluable asset to our business”, says Allister.

HOW TO CHOOSE THE PERFECT WINE TRIBUTE

The Ashmead boys tried many years ago to name a wine in their mother’s honour, however were forced not to as Lorraine was too modest and too humble to allow it to go ahead. That wine was later named the Ashmead Cabernet Sauvignon.

A few years later a marquee birthday was nearing for Lorraine, and so Cameron and Allister decided it was the perfect time to rename a wine from the portfolio in her honour.

The wine chosen to rename was the CSM, a Cabernet, Shiraz, Merlot blend that was first made in 1992. This wine was originally put together by Neil and Lorraine in an attempt to win Australia’s most famous and sought after wine trophy (the Jimmy Watson Memorial Trophy). The CSM did not win the award, however the family was indeed lucky that the Estate Cabernet was named the winner and the Estate Shiraz was named runner-up! The family did love the blend though, and so continued making the wine.

Neil and Lorraine Ashmead with the Jimmy Watson Trophy in 1993 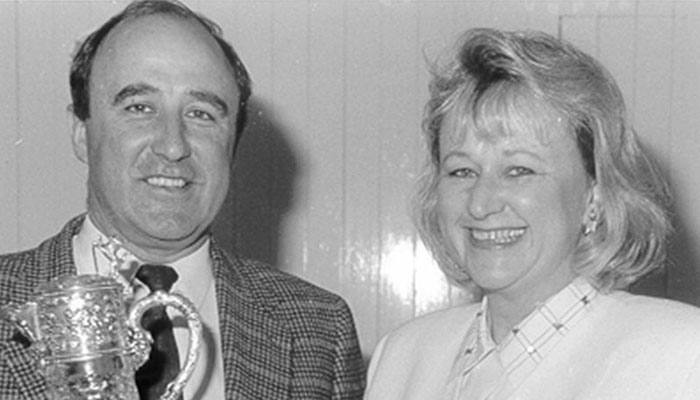 Cameron and Allister made the decision in absolute secrecy to rename the CSM – ‘Ode to Lorraine’, the ultimate birthday present – and a plan was hatched to unveil this wine at a surprise party, the likes of which the Barossa had never seen! Lorraine however got wind of the party, and quashed it by instead taking a trip to New York with a good friend.

All was not lost for the boys however, who told Lorraine that they would only allow her to go to New York if they were allowed to buy her and her friend dinner. Lorraine agreed. On the fifth of December she found her way to Jean Georges, as arranged by Cameron and Allister, and was seated at a table near Meryl Streep (not arranged by the boys, but very cool!)

The Sommelier came over and took Lorraine’s order of a bottle of Chardonnay from Oregon, but instead returned to the table with the inaugural Ode to Lorraine and said, “Perhaps you would rather drink this wine, Lorraine. Happy Birthday!” Many tears and much laughter prevailed, as Lorraine was truly touched that her sons had gone to this much trouble for her. She had assumed it was just a mock-up bottle, later realising that there was indeed dozens of bottles now named for her. You’ll have to ask Cameron or Allister for the rest of the story!

The distinctive package that this wine came in was always a source of much conversation. The assumption is that hot pink must be Lorraine’s favourite colour – this could not be further from the truth! The decision was made to have a bit of a laugh at the one mistake that Lorraine made when she was at the helm of Elderton.

Lorraine was entrusted with the job of choosing and signing off on the colour for the original CSM label (the 1992 version), and in her own words she has said that the night before the press check was the booziest she had ever had. Faced with going to the printers with one of the world’s greatest hangovers, Lorraine made the decision to not take her sunglasses off at the press check, as the lights were too bright. Having chosen what she believed to be an understated red colour, she left the printers to return to bed. However, when the labels were put on the bottles that year, the family was a little surprised to see that Lorraine had accidentally chosen pink. Whilst this mistake was remedied for the next vintage CSM label, the Ashmead boys decided to return to this colour when tributing the wine to their mum!

For the sixth vintage, 2008 Ode to Lorraine, the label was updated to something more classic, with touches of the hot pink still featuring. And from the 2017 vintage release, in sad news for some, but happy news for Lorraine, the beloved pink label was no longer.

The wine pays homage to some of the great wines of Australia’s history, being a predominant Cabernet/Shiraz blend, and is constructed each year to showcase not only the power and generosity that the Barossa has become famous for, but also structure and subtlety.

Ode to Lorraine is $55 per bottle, available for purchase online or in our Cellar Door.

Like a great Ode, this is an expressive mix of three great varietals which are blended in a complex scheme to achieve greatness. The Cabernet gives formality and structure, the Shiraz offers personality and exuberance and the Merlot presents friendliness and seductiveness. Cameron and Allister believe that these are all the traits of a great wine and an amazing person. 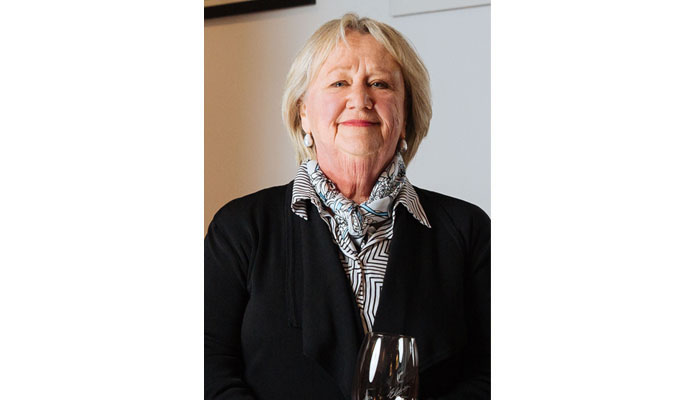