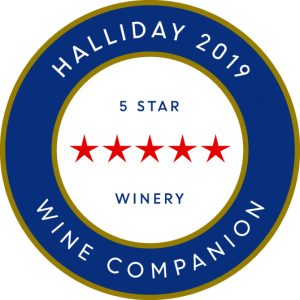 We are pleased to again received some great reviews in the Halliday Wine Companion, from James himself, as well as from Ned Goodwin who was one of the trusted Wine Companion reviewers this year.

Check out the outline of scores received!

96 points
A select barrel blend of each of the estate’s Nurioopta-planted varieties, partially fermented in concrete and barrel with the addition of a judicious smattering of pressings, this is a complex jigsaw. Thankfully delicious given the effort, cabernet’s voice rises uber alles with its potpourri of herbal berry notes and sagacious tannins, compressing the warm climate hedonism of the other parties into a nourishing whole. A rich phalanx of fruit and glossy structural attributes.

Read more about the Ode to Lorraine story – eldertonwines.com.au/product/ode-to-lorraine/

95 points
A rarity on these shores, this logical blend is an archetypal Mediterranean one, from the Languedoc to Spain. Why? Grenache’s bumptious hedonism is ably tamed by carignan’s bristling acidity and sinew. This is no exception. Barossan fruitcake spice and raspberry liqueur DNA is all there, but with a wiry bristle of carnal allure and a welcome rasp.

94 points
Sourced from water-friendly, gnarled shiraz vines, the bottle is the sort that you hope for in a hotel sans gym! The wine is similarly impressionable: rich and glossy; polished beautifully by a piste of massaged tannins, oak endowment and dutiful acidity. Pulpy! The flavours are strongly regional: dark plum, fruitcake spice and beef bouillon to coffee-marinated bbq ribs, presumably from barrel fermentation and extended lees handling. Salacious, but delicious!

95 points
Oddly, I once poured this wine by the glass at an emploie in Paris. While nostalgic, it still embodies the sort of inimitable, old vine (average 121 years) power that warm climate Australia does so well. The violet, pepper grind and meld of plummy fruit and Chinese five spice remain this brooding, highly ageable wine’s calling card. Vanilla pod oak serves as a welcome restraining device to the exuberance. Exaggerated? You be the judge.

96 points
Cabernet’s bursting swag of currant, dried sage and olive, at least as its voice in warmer climes, is all here in spades. What, though, makes this wine impressive, is its sheer strut across the palate. Buxom and confident, yet dichotomously restrained (at least in a warm climatic context), it coats the inner sanctum with a smooth veneer of tannin and old vine glycerol.

Cheers ’til next time!